The County is Rutland County Council.

During March and April the Braunston Traffic Calming Group logged the speed and volume of traffic passing through the village; we used a radar logging device similar to those used by police and the Rutland County Council. The device recorded an extensive set of data that we will use to demonstrate that we still have a significant speeding problem.

The results show:
Knossington Road, inside the village, 200m from the 30mph limit sign:

The '85th percentile speed' into and out of the village is an important measure; it is the speed at which, or below, 85% of traffic was travelling, and is used by the Police and other authorities to determine whether action to reduce speed levels is needed. Typically, action will be taken if it is greater than 35mph in a 30 zone. This summary data includes the period when traffic lights were in operation on Knossington Road; the detailed analysis shows significantly higher speeds when this period is removed in the detailed version of the analysis.

These results show that there is clearly a significant speeding issue in the village, and the existing traffic calming measures simply just do not work. 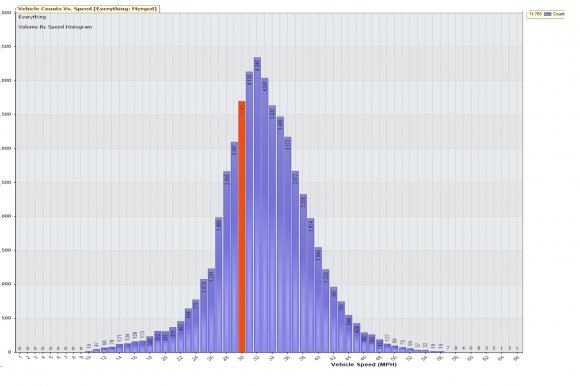 Bar chart showing the number of vehicles travelling in and out of the village (vertical) against their speed (horizontal).

The full report and analysis can be read in this document:

After conducting a speed survey in 2016, RCC approved the installation of a single chicane build out in the Knossington Road. A further speed survey showed that this was not working, and a second chicane was added in 2019. Two further speed surveys were conducted in June and November 2019; the June survey showed that the double chicane still wasn't reducing speeds to acceptable levels. However, when the November survey was done, during a period of dreadful weather, RCC determined that the speeds had now been reduced to 'acceptable'.

The summary results from the various RCC surveys were as follows:

In January 2020 RCC adopted a new policy, which put a moratorium on any further speed surveys for three years after an 'acceptable' one, and RCC have thus refused to consider the repeated requests for action made by Braunston Parish Council.

Whilst holding this policy on the speed cushions, RCC has agreed an upgrade of road signs and road marking to improve safety on Oakham Road, and a review by the police of our request for 40mph buffer zones at each end of the village.

Given the RCC position on speed surveys, the Parish Council has installed a traffic logger to measure speeds for one month, and will submit the data to RCC in due course. We will publish interim results on the website, but already we can see that average speeds are consistently more than 30mph, even when there were traffic lights in place during the recent roadworks.

History of the campaign

Here are the full details of proposals, and reports from meetings that have been held.

For some time villagers and the Parish Council have been requesting RCC to create a footpath/cycleway between Braunston and Oakham to provide a safe alternative to the two road routes currently available. Unfortunately there has been little progress on this as whenever the council has indicated that there is money available, it is always awarded to other villages.

Here are the full details of the campaign.

Braunston used to be the village that BT forgot. Having been excluded from the RCC digital scheme because BT had promised to include us in their own Oakham rollout, we were then left high and dry when BT decided not to connect us. After a long battle we were finally able to receive superfast broadband via the HERBS scheme, a private initiative that provides fast broadband to rural communities. Ironically, the week after HERBS went live, BT connected us to their fibre network. You can now obtain broadband from HERBS, or from most ISPs.

For a very full history of our battle to be connected, here are the full details